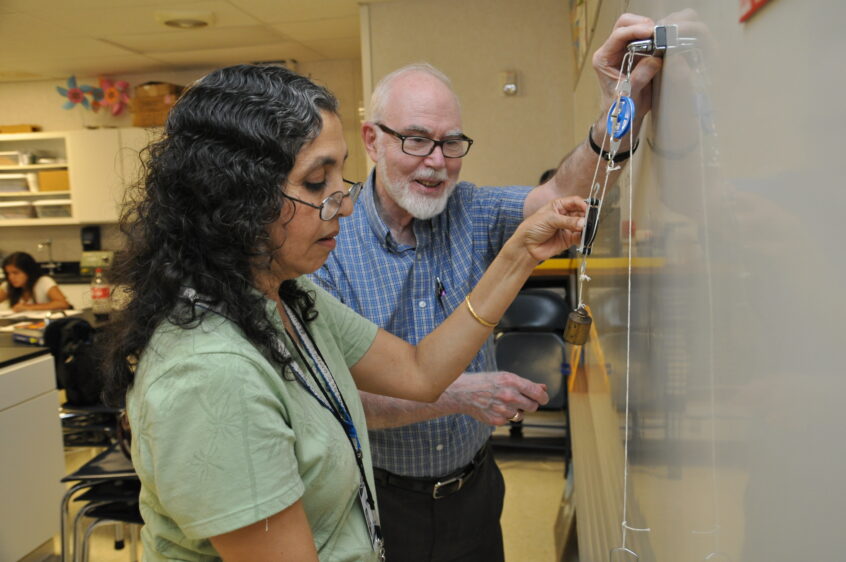 For more than 10 years, Fr. John Milton, CVS, generously shared his vast knowledge in physics and became a spiritual companion to the CRSM community. We mourn his passing on Jan. 24th, and celebrate the legacy he leaves, which will be carried on in our AP physics and science courses.

A retired physics professor at De Paul University and founding member of the science staff at Saint Viator High School in Arlington Heights, he commuted for more than 10 years to Waukegan to serve as advisor to Kumkum Bonnerjee, physics teacher. Viatorians were among the founding religious communities to back Cristo Rey St. Martin when it opened in 2004, and they continue to support its mission of providing a college prep education to students of limited means as an endorser.

“Fr. John was also a spiritual companion to many at CRSM,” said Jim Dippold, Director of Campus Ministry. “For many years, he celebrated Mass with staff during our annual week of professional development before the start of the school year. His reflections on his own teaching years and the ways in which we are called to walk with our students, to do ministry as teachers, was an inspiration. His calm, reassuring and peaceful presence was what was often needed most at the beginning of a new year.”

For years, Fr. Milton was the first person to greet CRSM students during monthly trips to the Viatorian Province Center for Taize prayer with students. “He always made a point to stay after each prayer service, listen to students to make sure their needs were being met,” said Dippold.

In recognition of his service, the physics lab is named in his honor.

“We will miss his gentle presence but trust that he continues to watch over and want the best for the CRSM community,” said Dippold.