Alumna Cheyanne Williams, Esq. is paving the way for the next generation of CRSM students
November 21, 2022
Alumni Spotlight 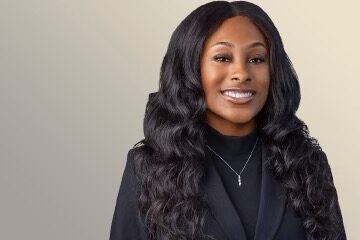 Daughter of a barber and medical assistant, middle child of three, and first-generation lawyer– Cheyanne Williams has always been inspired by the legal system. She was in grade school when she binge-watched TV crime shows and set her intention to become a lawyer.

The CRSM Class of ‘15 graduate’s commitment and determination never wavered.  Consider her checklist of achievements: She graduated Magna Cum Laude from Loyola University in in 2019 where she was a Cristo Rey Scholar,  Achieving College Excellence scholar, a member of the Alpha Sigma Nu Honor Society at Loyola and maintained a 3.5 GPA where she was a member of the Dean’s list. Last May she graduated from Georgetown’s law school. There she was the Staff Editor at Georgetown’s Journal of Law and Modern Critical Race Perspectives, Assistant, and Peer Mentor. During her summers while in law school she was a summer associate at Baker McKenzie (2020 and 2021) and King and Spalding (2021). After graduating from Georgetown’s law school, she spent the summer preparing for the July 2022 Illinois bar exam, which she passed and was recently sworn into the Illinois Bar. Recently she was named to the CRSM Board of Trustees. This fall she became an associate at King and Spalding.

Always drawn toward her goals, Cheyanne says she’s clung on to the CRSM mantra “to get to and through college,” expanding it to include any challenges she faced. “When I think about what I am doing in life, I first ask myself ‘what are my goals and what are the steps I need to take to achieve them?”

As a CRSM student, Cheyanne was a regular volunteer at PADS Homeless Shelter and the Northern Illinois Food Bank and Feed My Starving Children. Her work-study program at United Way of Lake County also was centered in advocacy.

Interspersed in her academic achievements, Cheyanne has seized all opportunities to explore international culture. At Loyola she studied abroad in Rome and has globe trotted to Kenya, Paris, London, Switzerland, Morocco, Spain, Bali and Brazil.